Sugar Makes the World Go ‘Round…

Sugar Makes the World Go ‘Round…

…but artificial sweeteners have a deadly impact! 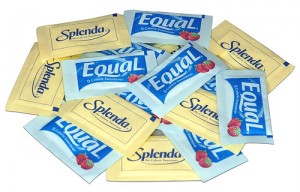 I had an interesting observation this week which led to this post. I was in a restaurant and saw a heavyset boy about 10 years old with a lemon a couple of tables over. I was curious because most 10 year olds do not like lemons. Knowing that lemons are a natural cleanser and can help reduce weight naturally, I was impressed…but not for long. I glanced over at him again and happened to see him pouring something from a pink packet onto his lemon. Yes, you guessed it, he was pouring packet after packet of Sweet’n Low on his lemon and then licking the artificially sweet powder off.

Thousands of books, articles and videos have been made educating people about this poison. New Mexico, Hawaii and some countries around the world are trying to pass legislation to ban artificial sweeteners.

Some artificial sweeteners, if stored at or above room temperature, breaks down into the toxins, formaldehyde and DKP (diketopiperizine). DKP resembles Formic Acid. Formic Acid shuts down the energy processes of cells, which allows brain tumors to grow. Formaldehyde binds tightly to DNA and the body cannot purge the toxin naturally. Tiny amounts of a toxin are more dangerous than one large dose because people do not know they are poisoning themselves, but the end result is the same.

Some artificial sweeteners break down into chlorine. Chlorine will suppress and destroy the endocrine system, which includes thyroid and hormone balance. This will actually cause you to gain weight via destruction, despite the word “diet” or “sugar free” on the product label.

Artificial sweeteners are an excitotoxin. An excitotoxin over-stimulates nerve cells, which exhausts them, damages them, and will cause cell death. Your brain is literally being excited to death. Think of a mini heart attack in your cells. This occurs in the brain and in peripheral nerves because the key components in aspartame are absorption accelerants and can easily cross the blood brain barrier. Some people react immediately, but for the majority of people, the damage is slow, silent and can be irreversible with long term use.

You need to become a label reader. Artificial sweeteners will show up in everything from juices, to gum, to OTC medicines, to weight loss and nutritional products, to baby food. A red flag will be if the product says “Sugar Free” or “Diet” or “Low Calorie” but you cannot go by the labeling alone. You must read the package on everything you buy. You will be floored to find out the hidden poisons in your food and drinks.

The ideal is to cut extra sugar almost completely out of your diet because every sweetener has some hidden dangers. However, there are sweeteners that I still recommend when used appropriately. Look for Agave Syrup (Raw Agave is better), Yucon syrup (not very sweet but good), Grade B Maple Syrup (formaldehyde free), Brown Rice Syrup (again, not very sweet), Dates (my favorite), and Raw honey. I look for honey that has not even been heat treated and contains pollen and wax. Most of the time if honey is a see-through golden color, it has been heat treated in some way. Heat kills the natural enzymes which keep honey a perfect food instead of a destructive sugar. Fruits and some vegetables are a great way to sweeten something naturally.

I do not recommend Stevia. This is for another article. Stay Tuned.
Update: Click here for the new article about Stevia.

Food Additives (That You Are Eating) That Should Never Be Eaten!

How to Naturally Increase Low Stomach Acid And Improve Your Digestion

HCG for Weight Loss – Who Should You Believe?